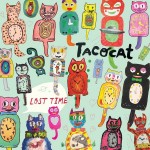 Tacocat‘s Lost Time has been one of the great joys of 2016 – it’s a technicolor blast of poppy girl-powered punk that gleefully smashes the patriarchy with wryly humorous lyrics and shout-along choruses. Though its chart peak was last semester, the album is still going strong at stations around the country because its deep enough to provide them with a wealth of playable, exuberant tracks. One such track is “The Internet,” the video for which just premiered on Stereogum. The new clip, directed by Faye Orlove, is “essentially a lyric video, but it cleverly walks you through the all the forms of the internet and many of the technological developments that have occurred since its nascent stages.”

Read the feature here, and give Lost Time another look if it hasn’t already made it on the airwaves at your station.