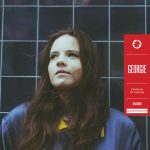 Georgie is a fresh singer from Nottingham, England with a classic sensibility that belies her 21 years. Her music is being released by Richmond, Virginia’s Spacebomb Records, a label “shaped around traditional models and time-honored ways” that calls itself “a house band, a unified crew of arrangers and musicians, artists, scribes, vibe-gardeners and business men who feel it takes a village to produce a record.” All the hallmarks of the Spacebomb sound are here: warm, sinuous bass lines and rhythms, the right pacing, and Trey Pollard’s skillful arrangements in all the right places. The result is a well-built, living song suitable for modern times.

Her debut track, “Company of Thieves,” rides along a fuzzed-out ‘60s guitar motif with a few Sly Stone-style production touches that shake the song right down to its foundations and create a moody atmosphere for perfectly poised lyrics. Georgie’s voice is an instant pleasure; it’s cutting yet sweet, searching yet powerful. Each interaction between Spacebomb’s house band and an artist is a kind of poetic exploration, and the timeless interplay between American and UK music traditions provides context for Georgie’s easy and heartfelt connection to the Spacebomb ethos. Speaking of the recording process, the singler said, “It was a special moment that made me fall in love with making music even more, which I thought was impossible.” She’ll be touring the UK this fall, and next year will return to Richmond to record her debut album.

“A flashback to early ’60s rock ‘n’ roll and girl-group pop, though it skews closer to Amy Winehouse than, say, Vivian Girls. Georgie’s vocals are proud and unrelenting… Georgie is an inebriating presence, backed here by devious basslines and subtle electronic nuances.” -Stereogum

“A wonderful single, it’s rooted in that incredible vocal, a work of purpose and power.” -CLASH Music