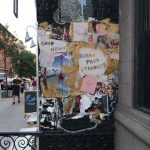 With “Good News,” the trio delivers a soulful, piano-laced pop number that embodies the band’s mission of making music that “celebrates the small victories in life,” as Ronson explains. “It’s about recognizing that you have no control over how insane the world is, and trying to have fireworks for the little things that make you feel good.” “Photos & Liquor” infuses hypnotic guitar tones into a hazy meditation on how booze and memory can warp reality. In crafting the song’s pained lyrics, the band mined inspiration from an old picture of Thompson and his ex. “In the photo they’re kissing on the beach and it looks so romantic, but really they were fighting and Ethan kissed her to shut her up,” says Ronson. “It made me think about how easy it is to romanticize certain situations when the reality was completely different, and how we don’t have pictures that really show the bad times.” Despite the songs’ cinematic scope, they have an intimate feel that’s got much to do with the unbridled honesty that Ronson and Thompson channel into each lyric. And though the Ocean Park Standoff sound is built on feel-good anthems, there’s also an undercurrent of melancholy that give “Good News” and “Photos & Liquor” a powerful depth.