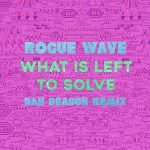 Dan Deacon has submitted a remix of “What Is Left To Solve,” the first single from Rogue Wave‘s 2016 LP Delusions Of Grand Fur. The album is notable for the band’s ever-so-slight shift towards synthesizers, but Deacon’s new remix takes Rogue Wave to a new and imminently danceable level of electronica.

Talking about the remix to Brooklyn Vegan, Zach Rogue said, “The song has so much space, I knew it could move in another direction in other hands. Dan seemed like just the person to reimagine the song, since his creativity seems to know no bounds. At first, the mix sounds like he threw it into a washing machine on spin cycle. Total chaos. And then the song shifts into this new song that is just tonally really different. It’s like this beautiful exploding flower.” According to Deacon, “I had a lot of fun chopping up to the vocals in to various sequences before chopping up the rest of the stems. I tried to keep a similar song form to the original. I didn’t add any sounds. Everything is an chopped or otherwise altered version of the original audio.”

“‘What Is Left To Solve?’ reverberates with a sense of urgency… It’s a bit of a departure for Rogue Wave, infusing their classic indie sound with traces of krautrock and new wave.” -Stereogum