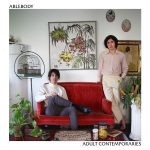 Drowned in Sound has a lengthy feature on Ablebody, which goes in-depth with band mastermind Christoph Hochheim as he explains the process behind the creation of the band’s new LP Adult Contemporaries. Drowned in Sound gives a history of the band, whose members have played with The Pains of Being Pure at Heart and The Depreciation Guild and who have worked with artists including Anamanaguchi. The blog also gets the details about the album’s recording process, and how the band sought to keep the magic of its demoes while producing the record with Kenny Gilmore (Ariel Pink, Nedelle Torrisi, Angel Deradoorian). “I think there’s something sacred with the demo,” Hochheim said, “the moment of inception of the song… At the time I wrote a lot of these songs, I didn’t have a lot of equipment to make what I was demoing the final product. With the latter half of this record… we just took huge blocks of sound from the demos. Putting my mic on the floor of the bathroom, and playing guitar or something. We’d spend hours trying to recreate that and realize that the original demo tracks are better.”

This process, and the intricate care the singer/guitarist took with his lyrics, made creating the record a slow-going process. Fortunately it’s finally finished, and it’s finding fans across radio with its beautiful blend of nostalgia and novelty. Read the interview here, and get Adult Contemporaries spinning now.