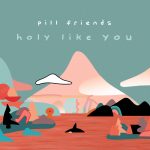 File Under: Music has released the third single in its One Song At A Time series, from Pennsylvania five-piece Pill Friends. The song, “Holy Like You,” follows the band’s February LP Child Sacrifice. It’s a lo-fi midtempo rocker, with chugging guitars and earnest vocals that the AV Club has compared to “one of Modest Mouse’s down-trodden ballads.”

Announced last month with the release of Skye Wallace‘s “Not Ready For This To Start” and Johnny Foreigner’s “Flooding,” this is a biweekly series of unreleased tracks & music videos for artists from Canada, the UK and the US, including Wallgrin, Slime Girls, Wallgrin, and Crywank. Created by Luke Ramsay, the uplifting video is painted in pastel colors. According to Ramsay, ““I spent a lot of time listening to the song and connecting to it’s rhythm, wanting to show this movement syncing with the song. I intended the imagery to not be literal to the lyrics, because I like it when a music video adds a third layer to the song. I approached it with simplicity, like one of my paintings coming to life.”

“[‘Holy Like You’ features] breezy lo-fi/indie vibes that are juxtaposed with lyrics… that are saturated in a sense of eternal apathy.” -WXPN

“Though a lo-fi tag is never too far from a Pill Friends track, the Scott Stitzer produced “Holy Like You” is as crisp and warm as the lines and colors in the animated music video.” -New Noise Magazine