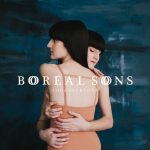 VUE Weekly has a feature on Boreal Sons, whose You & Everyone LP is currently at CMJ. The band lost its guitarist before the making of the new album, a topic that VUE discussed in depth with the keyboardist/singer Evan Acheson. “At the beginning we had no idea what we were doing or how we were going to make this record,” Acheson told the site. “We’ve never had the same guitar player for any of our releases, and realized that maybe we didn’t need one for the next project. It was a challenge born mostly out of necessity, but I think we really rose to the occasion by restructuring as a trio. We just hoped that the old creative saying ‘limitations set you free’ would force us to think outside the box.” According to VUE, on You & Everyone the band has “successfully incorporated a variety of synths into their arsenal without ever souring the luscious nectar of Acheson’s sumptuous voice, which radiates at the center of every composition.”