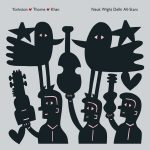 The “rich diversity” on Yorkston/Thorne/Khan‘s new album Neuk Wight Delhi All Stars “sounds neither forced nor fake,” writes The List in a recent review. The album quickly follows the band’s 2016 debut, because, as The List explains, “when you hit upon an idea as good as this one, why not keep at it until you feel it’s been expended?” The zine goes on, “As the title of the album suggests, there seems to be a certain boldness this time, which leads to dexterous fusions of sound and intercontinental style… There’s a redolence of the 1960s folk revival throughout, with the traditional opening its mind to a hint of the psychedelic.” On its way to giving the album four out of five stars, the review also finds time to compare the trio to both Nick Drake and Can.