New Music From Anna of the North 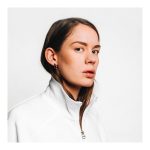 Anna of the North has found an international audience and viral success with an epic, swooning, and ethereal sound that, according to the FADER, “brings out Scandi-pop’s sensitive side.” The project got its start when singer Anna Lotterud, who grew up in a small town and was managing a clothing store in Oslo, began to feel unsettled in life and decided to travel alone to Melbourne, Australia. There, she met Brady Daniell-Smith (aka Little Dreamer), a fellow Norwegian and a producer, who recognized her talent and invited her into his circle of friends. Soon, a fruitful collaboration bloomed and Lotterud became Anna of the North. Since, the duo has thrived, reaching over 75 million streams on Spotify and topping Hype Machine, while Lotterud has seen saw her profile rise thanks to guest spots – next to Frank Ocean, Steve Lacy, and Rex Orange County – on Tyler, The Creator‘s album Flower Boy. Now, Anna of the North has a full-length LP: Lovers.

Lotterud describes the album as “deeply rooted in heartbreak… a subject that courses through the veins of all ten tracks — through the turmoil, the guilty and the tentative joy of finally letting yourself move on.” The LP is held together with trancelike beats, wistful vocals, and emotive lyrics that fuse on buoyant lamentations of fading love. Highlights include the softly stomping “Someone,” which draws from 80s influences and sports a might hook; “Lovers,” a pensive and subtly-developing lament that gains gravity with repeated listens; the slow, sparkling, and dreamy “Baby;” and the spacious, longing album closer “All I Want.”

“This year’s chillest heartbreak record… [a] seamless debut.” -The Fader

“Lithe, layered synth-pop… with all the slick pop sensitivity of MØ, albeit pared down from a club jam to echoey early morning sounds… Lovers is a slick, listenable debut with a strong sense of direction and poise.” -The Line of Best Fit