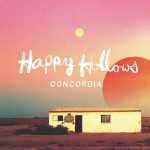 Art-rock duo Happy Hollows was founded by two polar opposites. Free-spirited guitarist Sarah Negahdari initially met bassist Charlie Mahoney at an LA strip mall where she was reading Tarot to pay bills; he’d just arrived from Washington, DC to pursue a PhD. Yet the two clicked as friends, and years later they’ve toured across the country and become a beloved staple of Los Angeles’ underground. Negahdari has earned a reputation as a commanding frontwoman, wowing audiences with her blistering guitar playing and charming them with her earnest, expressive, and emotive energy. On Concordia, the band’s third LP, Negahdari and Mahoney successfully transfer that energy onto studio recordings – a goal that has vexed many talented bands before them – while incorporating layers of synth into the post-punk, guitar-driven sound for which they’re known. The album was partly crafted in London with the help of legendary mixing engineer Gareth Jones (Grizzly Bear, Depeche Mode, Interpol), as well as in LA with producer Lewis Pesacov (Best Coast, Fool’s Gold, FIDLAR).

A true blend of expressive, post-punk instrumentation and neo-new wave flair, Concordia employs analog synth melodies, angular guitars, and polyrhythmic drumming to anchor Negahdari’s soaring vocals and lyrics that explore topics of redemption, triumph, loss, and freedom. Opening track “Way Home” — a Spotify New Music Friday selection — showcases the band’s energy and catchy song-writing ability, while “Decide” is a powerful, driving song about turning the page on the past. “Meteors” highlights the band’s more celebratory side while also showing off their musical chops and “Feel the Moon,” one of the album’s highlights, goes from groovy to explosive in a heartbeat as Negahdari sings about the moon’s symbolic connection with natural energy and feminine wildness. Concordia represents the culmination of Happy Hollows’ artistic progression, combining live dynamism and raw energy with a creative sonic palette and layered arrangements. The band has flown into new territory and found their voice with their most realized record yet.

“Fierce guitar work and an otherworldly blend of glimmering synths. This is some cosmic stuff — but it also has a lot of heart.” –WNYC

” …Distinct echoes of The Cure and the Yeah Yeah Yeahs… [and] a mix of Siouxsie Sioux anxiety/sexuality and Bat for Lashes enchantment.” –Blackbook

“Sarah Negahdari [is] a powerful but economical guitarist… And her voice… commands attention… There’s a feeling that this music could literally go anywhere– and that Negahdari could figure out something to sing over it no matter where it might roam.” -Pitchfork