Coast Modern, Who Have The Highest-Charting Debut at NACC, Get a Nod From The Northern Student 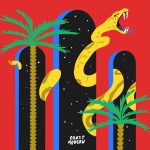 Coast Modern‘s most recent single might be called “Dive,” but that doesn’t mean their debut has come anywhere near taking a dive down the NACC chart since it started moving up it last month. The duo stayed at #15 for the second week in a row, finding themselves amongst a cadre of huge and impressive veterans. Coast Modern is actually the highest-charting debut LP at the NACC 200 right now, so thanks to everyone who has gotten behind the project! Keep them up there for as long as you can.

“Coast Modern is my new favorite band,” says The Northern Student‘s Shawn Campbell. According to his review, the band is good for fans of MGMT… and Grouplove. “Every song on the album is so addictive,” writes Campbell, “that I’ve listened to it on repeat at work enough I thought my coworkers would be sick of it. Turns out they love it too.” Read Campbell’s full review here, and check out his full Spotify tracklist of favorite songs of the summer.