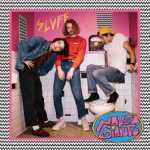 Naked Giants spend a whole lot of time on the road, as Alt Citizen recently detailed. According to the site, the band is incredible live. “I don’t think I’ve ever seen a crowd that hyped for an opening act before… No one was too cool, checked out, or on their phones — just purely captivated by the surprisingly joyful frenzy that was shredding up the stage.” The zine caught up the band for a “What’s In The Van?” segment, and filmed the trio rifling through their touring essentials while telling stories of their adventures on the road. It’s an engaging video, and it accompanies an embed of the band’s recently-released Green Fuzz EP. Check it out here!

The boys will presumably be taking their van to get to the shows they’re playing this week. Here’s the schedule: