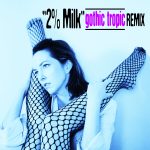 The 405 has the premiere of the remix Gothic Tropic recently made of Alex Lilly’s “2% Milk.” The song comes from the album of the same name, which is currently at on the Radio 200 and has been getting solid airplay around the country. It’s been reworked by Gothic Tropic’s Cecilia Della Peruti, who plays with Lilly in Beck’s touring band. According to the 405, “Alex Lilly’s recent album, 2% Milk, features ominous thumping synths from the start. Gothic Tropic’s re-work makes it a thousand times groovier.” See the premiere here.

Alex Lilly has the following tour dates later this month: