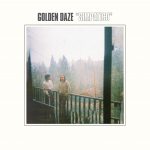 Over musical backdrops ranging from dreamy folk to Seventies-inspired balladry, Golden Daze presents finely-crafted pop songs with bold admissions of love, shame, doubt, and gratitude. The duo was formed in 2013 by Jacob Loeb and Ben Schwab following a collision of friendship and shared musical sensibilities that spanned Portland, Los Angeles, and their overlapping Midwestern roots. The brotherhood at the heart of their band is not just the conduit for their music but also the subject of their appeal. Singing in gentle unison, their voices melding together, Golden Daze unwaveringly present themselves as a single unit. They released their debut LP in 2016 and have toured with Twin Peaks, Woods, and Whitney.

Glimpses into this complex duality are spread throughout their sophomore album. Loeb and Schwab retreated to the woods of Big Bear, California to record Simpatico, which finds the duo delving further into their folk roots. According to the duo, “We definitely spent a while sculpting the arrangement but the lyrics, melodies, and chords all kind of poured out. A lot of thoughts and feelings that had been built up, lying dormant were finally set free. It was vulnerable to record because we were more or less singing about our friendship while the other was, like, two feet away.” On the opening track “Blue Bell,” for example, the duo sings, “Maybe I should stick around, Swore that I was leaving” in a manner that is both aching but hopeful. At the heart of the record’s sonic identity is a conversation between friends and artistic collaborators, yet also between artists and audience. From its first tentative offer to “stick around”, Simpatico is a journey of discovery, of forgiveness, of surrender, one that culminates in the quiet, self-assured farewell of its final track: “I’ll still be around my friend.”

“Coated in dreamy folk balladry, mutating the lo-fi gauze of their first record into a warmer, more mysterious brooding. It’s both aching and hopeful.” -Stereogum

“Each listen to Simpatico seems to bring out more character in the individual songs.” –Popmatters

“Loeb and Schwab are revisiting their sonic roots and experimenting with a pleasing fusion of dreamy folk and upbeat indie elements in Simpatico.” –Onestowatch