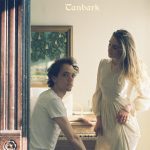 Tanbark began in 2011 as a long-distance songwriting collaboration between Chloe Nelson, who was studying art history in London, and James Jannicelli, a Minneapolis-based musician. By 2012, they were both in the Twin Cities, where their country and folk-inspired songwriting and close vocal harmonies began to form the basis of their sound. In 2014, the band further fleshed out their unique style in the making of debut album Write Soon, which brought together their spare and raw acoustic folk influences with fuller, pedal-steel-and-Telecaster country sounds and textures. Nelson and Jannicelli also relocated to Brooklyn that year, soon finding their place in its thriving scene. For Tanbark, their self-titled second LP, they enlisted engineer and musician Sam Owens (Cass McCombs, Blonde Redhead).

The new LP, which comes as the pair finally feels like New York has become home, is an honest portrayal of their first few years in the massive city. Over lush arrangements that recall Fleetwood Mac and Neil Young, the album’s songs illustrate the pair’s constant search for an authentic voice and beauty underneath the hustle. With the moderately-smoothed edges of their personal experiences set against golden country music tones, this project recorded in the midst of a harsh New York winter oozes warmth from every groove and the lyrics roll between fantasy, innocence, and desire.  While Nelson’s delicate vocals trip and dance along the verses, they anchor the band’s sound from the pensive opener “Promise To Send” to the acoustic beauty of heart-wrenching closer “Like One,” Tanbark is a delicate rendering of a journey that’s been tough at times, sweet at others, and always beautiful.