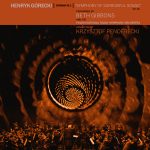 Beth Gibbons has earned much critical acclaim for her vocals for Henryk Górecki‘s Third Symphony, which she performed in 2014 with the Polish National Radio Symphony Orchestra under the direction of Krzysztof Penderecki. The recording of the performance was recently released by Domino and has been getting a lot of quality spins at radio. Listeners who’ve enjoyed the audio recording may also be interested in checking out a powerful, visually-moving video of the performance.

See a video of the symphony’s second movement, which interestingly juxtaposes a close-up of Gibbons with cascading shots of the ochestra and glimmery gold and red animations based on the album’s cover art, here.