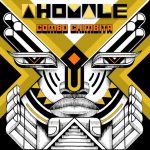 Combo Chimbita‘s Ahomale hit #1 on the NACC Latin chart last week. Thanks to all of the stations that charted the record! It’s also aiming for chart numbers at Radio 200 and NACC World, and is a fantastic listen for fans of intensely cosmic psychedelia en cualquier idioma. Be sure to include them on your charts this week.

Premier Guitar writes that “In the first few minutes of Ahomale, the members of Combo Chimbita—four Colombian immigrants who met in a segment of the New York City music scene that encouraged sonic exploration—display the respect that they bring to the musical traditions they grew up around, but also show that they have their own ideas about how to create within that heritage.” The site has an interview with the group’s Niño Lento, whose smart guitar playing is “at the center of Combo Chimbita’s sound.” Read the interview here to learn all about the guitarist’s style and its influence on the band’s overall sound.