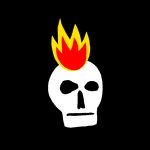 “New music, sounds and images – a whole new reality of his artistic world.” This is Maria Markouli describes the new Lost In Stars video for “Wand,” which has premiered on her blog It’s My Blender. She further describes the video as being “like an old movie playing in the backstage of our conscience,” and compares the visuals to a “dream sequence of a David Lynch movie.” These are well-founded comparisons as Dylan Willoughby of Lost in Stars has continued to draw from footage filmed by renowned surrealist Man Ray, a major influence on Lynch’s directorial works including Twin Peaks and Lost Highway.