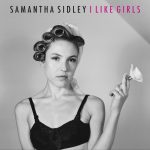 “I Like Girls” is a peek into a meticulously-crafted debut album from Samantha Sidley that features the beautifully-trained jazz vocalist taking confident ownership of songs written for her to sing by some of the most important women in her life. This unassuming anthem was co-written by Alex Lilly and Sidley’s wife, Barbara Gruska (The Belle Brigade, Fiona Apple, Ray Lamontagne). “We’ve been able to relate to songs that come from straight perspectives our whole lives,” says Gruska. “We have to have faith that straight listeners can  relate to songs that are written from gay perspectives. It’s as if Sam is saying, ‘I’m gay. I love being gay. If you’re cool with that, listen on, because I’ve got a lot more to say!’”

The song is the first offering from Interior Person, the full-length album that will arrive in September via Inara George’s Release Me imprint. The record was produced by Gruska, who also drums on the LP, in a studio Sidley built in her childhood bedroom. Says Sidley, “My record sounds exactly like what I needed it to sound like – the old records I grew up on, mixed with now and the future.”