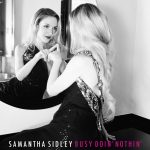 Samantha Sidley’s Interior Person, the full length LP due out in September via Release Me Records, is a testament to the jazz singer’s lifelong love of vocalists. “My whole life was a song,” Sidley says of her childhood. “If I looked at a tree, it was a song. If I felt happy, sad, joy, it was a song… I’ve always considered myself an interpreter, which is sort of an undervalued art form. I like to take a song and make the story true for me.” Throughout the upcoming LP, and perhaps most notably on lead single “I Like Girls,” Sidley uses her voice on original songs written for her by Inara George (The Bird And The Bee), Alex Lilly, and her wife, Barbara Gruska (The Belle Brigade, Fiona Apple, Ray Lamontagne). “They wrote songs that are all very personal to my story – they literally are my story – and from my lesbian perspective, which I appreciate so much,” Sidley explains.

There is one cover song on the album, as a nod to Sidley’s background as a youthful singer of standards in the legendary Oak Room in New York City’s Algonquin Hotel. And while so much of Interior Person is about girls, the song she chose to remake is “Busy Doin’ Nothin'” by The Beach Boys. “This song is from one of my favorite Beach Boys records, Friends,” Sidley says. “I was on a leisurely walk in my neighborhood listening to it and realized that the song is a story I pretty much live every day. I knew it especially when Brian Wilson says, ‘I get a lot of thoughts in the morning, I write them all down, if it wasn’t for that, I’d forget them in a while.’”