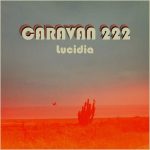 Caravan 222 is a San Franciscan super troupe and musical collaboration formed by adjoining members of some of the Bay Area’s top bands. The cosmic Californian group consists of Jacob Landry (Lee Gallagher and the Hallelujah), Kyle Demartini (Down Dirty Shake), Nate Porter (New Sun Company), Dashiel McClary (Big River Ever After), and their Chilean counterpart, Simon Todorovic (A Full Cosmic Sound). With all the members being individual writers, the band invokes a range of emotions, from bittersweet ballads and cruising poem songs to dirty rock and roll anthems. They are psychedelic freaks in a rock ‘n’ roll circus, offering a mad world of Bohemianism, never saying no, and going whichever way the wind blows.

The new Caravan 222 single was recorded at San Francisco State, with overdubs, mixing, and mastering at Light Rail Studios. These two songs stay true to the groups unique groovy outlaw country sound, which harks to Creedence Clearwater Revival, The Dead, and Desire-era Dylan.

RIYL: SEND MEDICINE, Down Dirty Shake, Frankie and The Witch Fingers, Sonny And The Sunsets