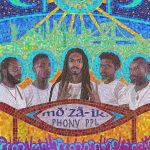 Liberation is both the modus operandi and main ingredient of the fearless five-man band Phony Ppl. Comprised of the cream of Brooklyn’s young musician crop, each member is a product of musical parents who gifted their children with exposure to the greatest, from Mandrill to Bossa Nova, and, most importantly, wings for exploration and self-discovery. The result is a collective that is as limitless as its music; one that has received praise from the likes of Tyler The Creator and Childish Gambino, performed with Erykah Badu, Fetty Wap and The Roots, and killed festivals (Camp Flog Gnaw), late night television (Jimmy Kimmel) and their own residency at New York City’s legendary Blue Note.

Phony Ppl’s latest LP has been received well. Titled mō’zā-ik. because each song is a singular piece of art possessing shapes and colors separate from the others, yet they all adjoin to make symmetrical magic. Setting things off is “Way Too Far,” a slow dance under purple neon to killer lines like, “‘I got you but it’s me i’m missing.” “Cookie Crumble” transports ears to the 1950’s after a latin jazz spirit possesses “Once You Say Hello.” The invitation to this exhibition is the palm tree-breezy hip-hop ballad “Before You Get A Boyfriend,” which transcends classification and time. Soft rock of the early 80’s, early 90’s rap, or the mood music of today? For Phony Ppl, the new album is simply an offering to the religion of music and attempt at adding more hues to future radio.

“Glimmers of jazz, funk, bossa nova and even a little kompa matched with loose, playful songwriting are what make this recording shine. And almost every song on the 11-track offering sounds like it could have been an everlasting jam session if sufficient studio time was allowed. “ -NPR