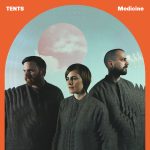 TENTS is a family band consisting of vocalists Amy and Brian Hall, who are partners and parents, along with guitarist/producer Chris Hall. Recently, they’ve been joined by Joe Greenetz (Sherwood) on drums and Matt Taylor (Motion City Soundtrack) on bass. Based in Portland, OR, the band serves up neighborhood nostalgia with a slant. TENTS has shared stages up and down the West Coast with the likes of Ten Fe, Nyles Lannon (Film School), Frankie Simone, and Kelli Schaefer, and released debut LP Deer Keeps Pace in May 2018. Also an audiovisual project, many of their songs are written as soundtracks to videos they make for an experimental Youtube series called Making Medicine.

Most of the music on the band’s new LP, Medicine, was conceived in the same manner. “Hutah!,” for example, is about body positivity and the beauty of life and began with a clip friend dancing in an abandoned warehouse. “Insert Some Quarters,” a call to action littered with Nineties pop culture references, originally soundtracked footage captured during a trip to Golden Gate Park in San Francisco. “Joy!” was written to footage of Hall jumping in to a kiddy pool, an image that is paramount to the band’s overarching themes. Parenthood is a focal point for TENTS, and on Medicine Brian sings from the perspective of a brokenhearted father drawing on the buoyancy of his children. “Parenthood has gotten me outside myself. I’ve let go of some grief,” says Hall. The images that inspired Medicine resonate, and the album scales many different terrains. At times full of joy and at other times full of grief, these songs erupt from inside of pain, presenting us all with the notion that life is full of beauty and meaning.

“Magic spouts effortlessly through this music. It feels like a bunch of kids laughing and shouting from the recesses of a playground, inviting the cynics and the skeptics and the wallflowers to join the fun.” -Consequence of Sound

“Blending strong lyricism, flowing melodies, and unfeigned vocals…, the group showcases what it looks like to live in the moment.” -The Spill