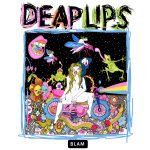 Deap Lips is a collaborative project between The Flaming Lips and Deap Vally. According to Deap Vally’s Lindsey Troy & Julie Edwards, who’ve been inspired by the Lips since 1999’s The Soft Bulletin, Wayne Coyne started following Deap Vally on Instagram after seeing them on tour with Wolfmother. He would tag them in random posts of the Lips in the studio, which not only delighted them but got them thinking about collaboration. Edwards and Troy had recently embarked on a series of yet-to-be-released collaborations with the musical friends including KT Tunstall, Peaches, Jamie Hince (The Kills), Soko, Jenny Lee (Warpaint), Jennie Vee (EODM), Zach Dawes (Queens of the Stone Age, Mini Mansions), and Ayse Hassan (Savages), so they reached out to Coyne in the same spirit and a plan was hatched for the duo to travel to the Lips’ Pink Floor Studios in Oklahoma City.

As Coyne tells it, Deap Vally arrived with “no songs” but were able to create the opening song “Home Thru Hell” quickly based off of a track he “quickly threw together” with Steven Drozd. After that, Coyne explains, “the session in Oklahoma City was fun and spontaneous and a very lucky kind of magic happened… They came up with ‘Sh*t Talkin’ and Dennis (Coyne, Wayne’s cousin and the Lip’s engineer) suggested we re-work [a song from his old band] into ‘There Is Know Right There Is Know Wrong.’ When our couple of days together had ended we all felt like, somehow, something had just begun. For the next year whenever we had another song idea we would put it down… and we would ship it off to the gals back in L.A. and see if they could turn it into something cool to listen to… and THEY DID… We dug out an old track that we originally did for Kesha (‘Love Is Mind Control’) and a great great re-imagining of the classic Steppenwolf song ‘the Pusher’ that was briefly considered for a Miley Cyrus project and these tracks, again, really suited Julie and Lindsey’s style and vibe. We were beginning to think we’ve accidentally made a really great record — but it’s not really a Deap Vally record and it’s not really a Flaming Lips record.  So (even if it is just this one time — who knows?? Maybe we’ll do another) the group Deap Lips was born.”

“Cosmic, synth-driven… taking us on a journey along a dark and lonesome highway.” -Mxdwn

Our servicing includes FCC Clean radio edits of every song.