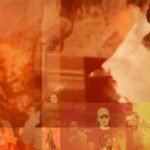 Driving, heavy, and mysterious, “Dug For Days” is the debut of Soft Sailors as a living, breathing band. The project’s previous releases have either been solo creations by the band’s multi-instrumentalist leader Geoff Geis (Pizza!, Big Whup, So Many Wizards), or they’ve been built in the studio by Geis and his longtime collaborator Tyler Sabbag. But there is a lean, muscular live version of Soft Sailors featuring Andrew Parker (Rumspringa, Sweet Bump It) and Jenna Parker (Big Whup, Mister Fantasy), and this is the first time that band has been featured on a recording. “Dug For Days” was captured live in a room, with the band’s friend James Hazley (Cockeyed Ghost) manning the drum kit.

The track is a slow-building, bombastic ballad propelled by Hazley’s thumping beat and Geis’ earnestly deadpan baritone. Addressed “to all the forgotten and the strange,” the song’s impressionistic lyrics convey a vague sense of hope and understanding to the misunderstood. For the video, Geis pilfered footage from an Egyptian ad campaign from 2010 called “Panda Is Not Told No.” It features an indignant, messianic panda who shows up in everyday situations to punish people who decline to eat a product called Panda Cheese.

“Disaffected and often eccentric indie-rock played as if [the band’s] life’s mission is to shake you out of your overpriced sneakers. Or at least nudge you away from the comfort zone of genre adherence.” –Buzzbands