Stereogum Bestows Album Of The Week Honors Upon Lido Pimienta, Who Goes For NACC Adds 4/21 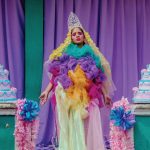 “On her latest album,” writes Stereogum, Lido Pimienta “casts sidelong glances at Colombia’s culture writ large, weaving her observations into songs that brilliantly deconstruct and reimagine the country’s signature sounds.” The distinguished site gave album of the week honors last week to the new record, Miss Colombia, which goes for NACC adds this week and is aiming to make a big splash on the NACC Latin chart – where it has already hit a pre-release peak of #2. In its lengthy exploration of the record, Stereogum tells audiences to “prepare to be stunned” by sounds that draw influence from all over the world.

Learn all about the record here, and get it started at your station today.