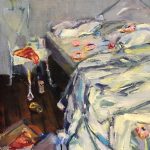 Love In Three Colors, a new three-song bundle by Alex Lilly, comes out July 31st via Inara George’s Release Me Records imprint. Lilly – who, in addition to her solo career, is a touring musician with the likes of Beck, Lorde, and Ry Cooder – describes the new songs as “a trilogy chronicling a relationship’s disintegration, aftermath, and the sunny side of being free of it.” But don’t be fooled into thinking you’re about to hear a “woe is me” breakup meditation. The New York Times described songs from Lilly’s 2019 album 2% Milk as containing tunes about “heartache,” “rejection” and “pervasive disillusionment,” but concluded that despite it all, they “keep their cool.” This new bundle, produced by Barbara Gruska (Samantha Sidley, The Belle Brigade, Neko Case) does, too!

Advance single “‘Amuse Me’ might be amusing and light, but in reality it’s about being with someone who did not amuse me at all,” Lilly reveals. “He was heavy and earnest the majority of the time,” she says about a former romantic partner with an icy demeanor. “I just wanted him to meet me halfway. So many problems in relationships can be solved with a little humor, don’t you think? Otis Redding says ‘Try a little tenderness,’ but I say, ‘try a little playfulness.’”