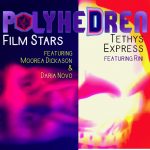 Polyhedren was born as a quarantine project from composer/producer Dren Mcdonald, who is known for crafting diverse soundtracks to video games such as Counterstrike Global Offensive, Gunman Taco Truck, Gathering Sky, Transformers: Age of Extinction, Cooking Dash, recordings such as The String Arcade, and the classic meme generator, Instagram’s SuperZoom “Dramatic” music stinger! Polyhedren is a collaborative music experiment, with every song a new creation with different guest musicians; 100% of the sales from all polyhedren music goes to the Bay Area Music Project, a non-profit, after school music program. Since the COVID-19 crisis began, BAMP has quickly adapted from their daily, site-based music program to an online, video-based, distance learning program.
​
The initial offerings from the project are two singles. “Tethys Express” features New York-based, Chennai-born singer, composer, and violinist Rini Raghavan, who spins in her unique take on Indian electronica. Raghavan has released three EPs worldwide – Kural, Alone in the Blue, and Maya – and has been featured in Rolling Stone India, Republic of Jazz, and World Music Central.  The funky, rocking “Film Stars” has vocals from Moorea Dickason (Raze the Maze, MoeTar) and San Francisco/Saint Petersburg-based composer, arranger and orchestrator Daria Novo.