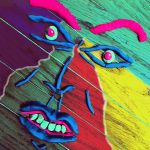 Blending together the sounds of lo-fi bedroom pop, progressive rock and 80s disco revival from his Belleville, Ontario basement, producer and comedian Kyle Woolven became Pekoe Cat after being inspired by his musical family to push the limits of his creative capabilities. Learning to play as many instruments as possible to avoid the social interaction that comes with forming a band with other people, Pekoe Cat knows that his experimental blend of disparate musical worlds plays into a niche market. All the same, he is proud of his unique sound and indie status for better reflecting the deeply emotional side of himself you won’t find in his comedy work. While Pekoe Cat believes that his background as a comedian helps him with storytelling and lyricism, being funny is never the goal as he reaches out to a separate audience and displays a different side of himself. In fact, simply reading the lyrics to some of his songs might make you wonder if you’re about to get into some crunchy guitars and darker instrumental palates instead of Pekoe Cat’s generally upbeat pop-rock soundscape.

Pekoe Cat’s latest release Menace comes as the follow-up to last year’s Jungle Cop, his debut project with Light Organ Records. Created in quarantine while juggling two very small children, Pekoe Cat takes a deep dive over five tracks into the frustration of pursuing two career paths that he wouldn’t recommend anyone follow due to the psychological toll of constantly putting yourself on display. Inspired by bands like Yes, King Crimson, and Tame Impala and excited by the genreless mould of modern music, Pekoe Cat’s desire to never make any two tracks sound alike results in a reflection of both current pop trends and quirky forays into psychedelic musical escapism. Due to a unique recording style that he once again put to work while creating Menace, many of Pekoe Cat’s most treasured musical achievements are created on the fly. Writing fragments of songs and recording his ideas simultaneously, Pekoe Cat is never quite sure where any of his songs are going to end up until the finished product comes to fruition. The spontaneity and flow of playing around with sounds and seeing what sticks is his favourite part of the creation process. As the instrumentals behind him alternate between catchy pop chords and virtuosic proggy soloing, the chaotic voice in Pekoe Cat’s head takes full control and informs him to ignore the reception, embrace the roadblocks in his way and do whatever he wants creatively.

“Music that is the embodiment of lo fi goodness.” -IMPOSE Magazine