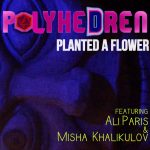 Dren McDonald is known for crafting the diverse soundtracks to video games such as Counterstrike Global Offensive and Transformers: Age of Extinction. His second music kit (“Gunman Taco Truck”) for Valve Software’s Counterstrike Global Offensive game (which enjoys over 20 million players) sold over 100,000 units in the first month of the Masterminds Music release this April. In the 1990s, he founded Vaccination Records Co., releasing experimental/oddball/weirdo rock records, including by his own bands, Giant Ant Farm and GrndNtlBrnds. Vaccination was responsible for Eyesore: A Stab at The Residents, a tribute record to The Residents which included Primus, Cracker, Stan Ridgway, Thinking Fellers Union Local 282 and many others. McDonald’s new project, polyheDren, is a collaborative musical experiment made to benefit the Bay Area Music Project, a non-profit after school music program in the San Francisco Bay. Since the Covid Crisis began they’ve quickly adapted to an online, video based, distance learning music program.

Each polyheDren release is a collaborative music experiment, with every song a new creation with a different guest musicians. “Planted A Flower” is the project’s third single and features vocalist Ali Paris (Alicia Keys) and cellist Misha Khalikulov (Rupa and the April Fishes) in a meditative, laid back soul groove assemblage. The drums are provided by game composer JD Mayer, while McDonald plays fretless bass, pedal steel guitar, electric guitar, and synths. As with polyheDren’s previous singles, this piece changed directions several times as each collaborator added their contribution to the creation, settling into a groove reminiscent of Nusrat Fateh Ali Khan and Pink Floyd.