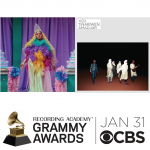 We are pleased to congratulate Lido Pimienta and Tinariwen on their Grammy Award nominations! Pimienta’s Miss Colombia is up for “Best Latin Rock or Alternative Album,” while Tinariwen’s Amadjar is competing for “Best Global Music Album.” We really hope they win! See the complete list here.

Both albums had fantastic chart runs and were absolute pleasures to promote. Amadjar is the eighth studio album by Tinariwen, a band of Tuareg wanderers who recorded the record while exiled from their native Mali due to civil war. Colombian/Canadian artist Pimienta soars on Miss Colombia, a second album that deftly merges modern and traditional sounds while asking poignant questions about identity, racism, class, and more. Get them in rotation if you missed them the first time around.