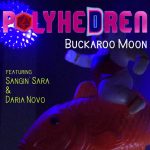 Dren McDonald is known for crafting the diverse soundtracks to video games such as Counterstrike Global Offensive and Transformers: Age of Extinction. His second music kit (“Gunman Taco Truck”) for Valve Software’s Counterstrike Global Offensive game (which enjoys over 20 million players) sold over 100,000 units in the first month of the Masterminds Music release this April. In the 1990s, he founded Vaccination Records Co., releasing experimental/oddball/weirdo rock records, including by his own bands, Giant Ant Farm and GrndNtlBrnds. Vaccination was responsible for Eyesore: A Stab at The Residents, a tribute record to The Residents which included Primus, Cracker, Stan Ridgway, Thinking Fellers Union Local 282 and many others. McDonald’s new project, PolyheDren, is a collaborative musical experiment made to benefit the Bay Area Music Project, a non-profit after school music program in the San Francisco Bay. Since the Covid Crisis began, they’ve quickly adapted to an online, video based, distance learning music program.

The project’s fourth single features Oakland-based vocalist Sangin’ Sara Williams, who has sung with 12-time Grammy nominated artist Ledisi for the last 15 years and has performed with Michael Franti/Spearhead, Stevie Wonder, Jennifer Holliday and D’Wayne Wiggins. On background vocals is Daria Novo, the Russian musician/composer who also sang on the previous PolyheDren single “Film Stars.” The vocals share space with field recordings of Cambodian children, instructional video narration and other found samples. McDonald produced and arranged the piece and played electric bass, electric guitar, analog synths/electronics and drum sequencing. This piece began with the challenge of taking a somber chord sequence from an old Brian Eno tune and transforming it into an upbeat, funk/soul inspired collage.