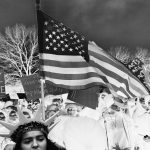 Now, The Smoking Flowers return with a gritty EP that finds them turning from the personal and towards the political. On the Patriocrisy EP, they attack some of the most pressing issues of this fraught time, from climate change to the devolution of our civic institutions. Hear three of the EP’s six songs – the title track, “Carry The Torch,” and “Oceans Are Rising” – now.