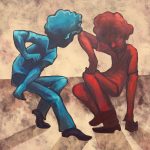 When Sunny War speaks, her mind roves endlessly, jumping between topics and spilling out rapid fire thoughts like her wildly inventive guitar playing. The pandemic has driven many away from their creative centers, but War has been uncommonly busy. She founded a Los Angeles chapter of the nonprofit Food Not Bombs and put together a network of volunteers to distribute vegan food to the homeless. She marched for Black Lives Matter in protest against police brutality and found time to cut a new album at her favorite spot, Hen House Studios in Venice Beach. War’s last album brought her praise and led to a powerful Tiny Desk performance at NPR. Though her new album brings with it a whole suite of expectations, War has shrugged those off.  She’s motivated less by what others expect and more by her own inner muse, and she’s surrounded herself with an artistic group of friends who are constantly writing, recording, and playing music.

Coming March 26, 2021, Simple Syrup has a vibrant, loose feel, more focused on the interplay with the musicians than previously. The pandemic has been a crucible for Sunny, burning away the parts of the old world that didn’t truly matter and leaving her with a new purpose. “Lucid Lucy,” the first single from the upcoming album, opens the album.