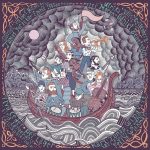 “James Yorkston gathered a big group of musicians for The Wide, Wide River, which is credited to Yorkston and The Second Hand Orchestra,” Talkhouse tells us in a preface to a recent feature. “Among those contributing to the album is Peter Bjorn And John’s Peter Morén, who plays guitar and sings on four songs. The two had a lively, slightly sarcastic conversation from their homes in Scotland and Sweden, respectively.”

“Songwriting is such a precious and such a joyful thing to be able to do for a living,” Yorkston says at one point in the conversation, which delves into their songwriting processes, experience working together, and feelings about various Beach Boys records. Check it out here.