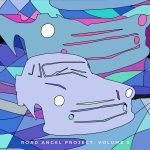 MXDWN has a feature on “Southern Nights,” the new duet between Michael Andrews and Inara George that appears on the fifth edition of the Road Angel Project series. “The cover is a softer version of Allen Toussaint’s 1975 psychedelic soul classic, which was fairly mellow to begin with. Passionate piano playing is replaced by Andrews and George’s more atmospheric guitar picking and synth pads. While Toussaint’s original distorted vocals were recorded using a Leslie Speaker Cabinet, which creates the signature psychedelic pop/rock vocal tone that artists like The Beatles loved, Andrews and George’s duet is much cleaner. The final result makes it a modern indie folk recording rather than a southern soul recording.” Hear the song here and get it in your rotation.

As with all Road Angel Project releases, proceeds from Volume 5 benefit Sweet Relief.