CLASH Interviews Frànçois Marry of Frànçois and The Atlas Mountains, Who Go For NACC Adds Next Week 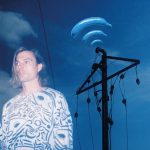 CLASH Music calls the new album from Frànçois & The Atlas Mountains, Banane Bleue, a “subtle, absorbing, and timely” collection in a new feature. The site has an interview with the band’s leader, Frànçois Marry, who explains that “this album started off in Berlin, then we did a bit just outside of Paris. Then we finished it in Athens, Greece. So by the time we finished the album I felt like I had created an axis through Europe, from Berlin to Athens via Paris. [With the title,] I was trying to picture a way to talk about that, and then at the same time I was very aware that I wanted the album to be very simple and tasty and sweet. And so I thought of a fruit! It’s a fruity album, so it seemed like a funky title.” Read it here.

We serviced Banane Bleue this week and it’s going for NACC Adds next week. Get it onto your playlist.