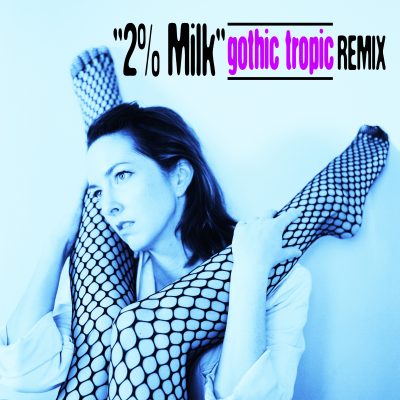 Alex Lilly has teamed with Gothic Tropic on a remix of “2% Milk.” The original song is the title track of Lilly’s new self-titled debut, which has been spun at stations around the country and has earned accolades from the likes of the New York Times. “I can’t get satiated. Things are easy now in the first world and yet I feel malnourished. Poor me,” says Lilly, when illuminating the song’s lyrical inspiration. “These lyrics were collaboration with a poet who writes poems on the spot if you give her a subject, Jacqueline Suskind. I always loved this poem and so I put it to music, tinkered it to rhyme and added some other sections. I guess it’s pretty angsty in nature but also weirdly soothing. The chorus is a little sad and jaded but also sexy? Give into the brainwashing as you would to a lukewarm pool of milk.”

The Gothic Tropic remix, created by Cecilia Della Peruti, reworks the track with a dancier vibe. According to Peruti, who became friends with Lilly when the two were touring as members of Beck‘s backing band, “During some crate digging for breaks and sounds, I got inspired really by a 70s band called Womb, and mixed that with a sort of Sneaker Pimps vibe.”

“Gothic Tropic follow in the footsteps of girl-rock powerhouses like Ladyhawke, while mixing in tones that almost sound like they were influenced by a 1980s Madonna.” -Mxdwn