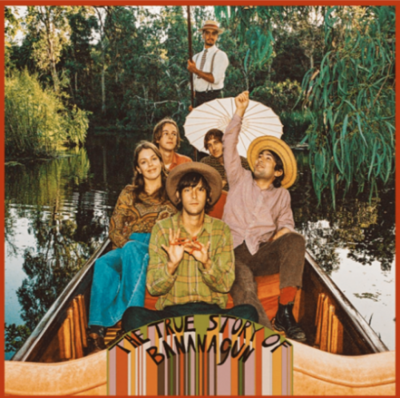 There’s an enticing lost world exoticism to the music of Bananagun, the Melbourne-based band with a sound that conjures the rhythms of Fela Kuti, the proto-garage fury of The Monks, and the grooves of Os Mutantes. It’s the sort of stuff that could have come from a dusty record crate of hidden gems; yet as the punchy, vibrant pair of sold out singles “Do Yeah” and “Out of Reach” have proven, the band are no revivalists. On debut album The True Story of Bananagun, they make a giant leap forward with their outward-looking blend of global tropical psychedelia. The set marks the group’s first full foray into writing and recording as a complete five-piece band, having originally germinated in the bedroom ideas and demos of  Nick Van Bakel (guitars, vocals, flute), who grew up on skate videos and the hip-hop beats that soundtracked them. Van Bakel was first joined by cousin Jimi Gregg on drums – the pair’s shared love of The Jungle Book apparently made him a natural fit – and the rest of the group are friends first and foremost, held together by a shared emphasis on keeping things fun. Jack Crook (guitar/vocals), Charlotte Tobin (djembe/percussion) and Josh Dans (bass) complete the quintet and between them there’s a playful spontaneity borne of late night jams and hangs at producer John Lee’s Phaedra Studios in Melbourne.

The band’s seemingly innocuous name has an underlying message of connectivity that matches the universality of the music. “It’s like non-violent combat,” says Van Bakel. “Or the guy who does a stick up, but it’s just a banana, not a gun, and he tells the authorities not to take themselves too seriously.”

“(4/5). Rhythmic refuge in these stormy times… This record just doesn’t sit still — it’s as if Bananagun are trying to make each song more daring than the last.” -NME

“(8/10) From the starting gate to the finish line, The True Story of Bananagun is a genuine work of delight to listen to in all of its funky, jazzy, psyched-out glory.” -Exclaim!

“Melbourne five-piece who dress like Os Mutantes and dance like Bobby Gillespie, but their grooves are impeccable. Let the sunshine in.”–MOJO