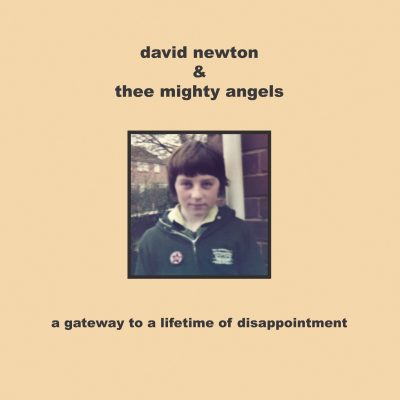 Wolverhampton, UK-born David Newton was the guitarist and songwriter behind C86 popsters The Mighty Lemon Drops, who starred on the front cover of an issue of NME and crossed over to top the charts at US alternative/college radio. Following a brief stint with The Blue Aeroplanes after the break-up of the Drops in the early 90s,  Newton relocated to Los Angeles in 1995 where he turned his garage in Burbank into a recording studio. Since then, he’s  produced and engineered more albums than he can recall, including records by The Little Ones, The Soft Pack, The Henry Clay People, The Blood Arm, and The Happy Hollows, to name but a few. After spending the 2000s having fun playing live with friends’ bands, including a lengthy European tour with the Eddie Argos/Dyan Valdes project Everybody Was In The French Resistance…Now, Newton in 2011 released his first ever solo record as David Newton & Thee Mighty Angels. The  acclaimed Paint The Town EP received enthusiastic reviews and radio exposure, while leading to some TV licensing opportunities. Since then, Newton has mainly concentrated on his production and recording work for other artists, squeezing in the occasional live appearance with his own band of musician pals, including shows opening for the likes of Peter Murphy, Mike Watt, and Tim Burgess.

So, here we are in 2020, and Newton is re-releasing the songs from Paint The Town along with five new recordings, grouped all together as  a new album called A Gateway To A Lifetime Of Disappointment. David Newton & Thee Mighty Angels provide a modern contemporary take on the melodic uplifting side of the 80’s post-punk sound, and the LP’s ten songs chronicle both the joys and the disappointments of what life throws at us. On lead single “The Songs That Changed Our Lives,” Newton is joined by his old pal Eddie Argos of Art Brut on a tribute to songs that made an impression on the two men musically and personally. According to Newton, the song “is basically a fun list of some of the songs that had a big impact on young me. I didn’t put too much thought into it really, it’s not a definitive list and there are so many missed out, I just picked the ones that rhymed ha ha. When Eddie said that he’d love to do the vocal on it I asked him if he wanted to omit or add anything, and he said no, they are ones that he would pick.”