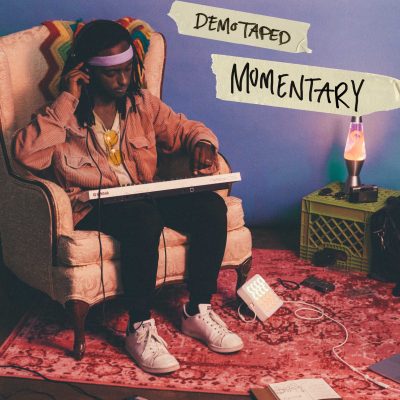 The 19-year-old behind Demo Taped, Adam Alexander, learned both the importance of fellowship and the art of showmanship from his grandfather, a preacher. “He’s not a showy preacher,” says Alexander, “but if he doesn’t get the reaction he’s looking for, he’s got funny ways to keep people’s attention. I did learn that from him.” In addition to gleaning these lessons from his grandfather and finding influence in the church band, he had his first experiences playing music via childhood piano lessons and nerve-inducing recitals. Somewhere in there, Alexander found a mindset that helped him beat stage anxiety —even today as he performs all over the US and across the globe. Yet the lead single from his new EP, Momentary, is called “Insecure” and deals with feelings of self-doubt and depression.

On almost every other level, “Insecure” is an ecstatic praise dance of a song, with spry piano/organ interplay; jaunty chords; lithe, deceivingly laid-back polyrhythms; and panoramic, futuristic choral flights. The song is a blissed-out gospel wrecking ball worthy of celebration, and the entirety of Momentary represents a seismic leap in craft and execution rarely realized by many artists. Until now, Demo Taped’s buoyant, precocious bedroom R&B seemed to belong to the Internet swell that pushed it into the pop consciousness. But there is a much, much larger stage set for Demo Taped with the delivery of Momentary. From the innovative use of a chiming organ hit in place of a snare snap on another EP standout, “Own It,” to the haunting restraint exhibited on slow jam closer “Winter Soon,” it is clear Demo Taped has evolved.

“Totally out of the ordinary… Demo Taped occupies his own unique, honest space.” -NPR

“New cut ‘Insecure’ rides a lush electro groove, a smoothed out slice of machine funk with a deeply physical feel. On top, though, Demo Taped places a pleading, emotive vocal that has a rich, gospel feel.” -Clash Music