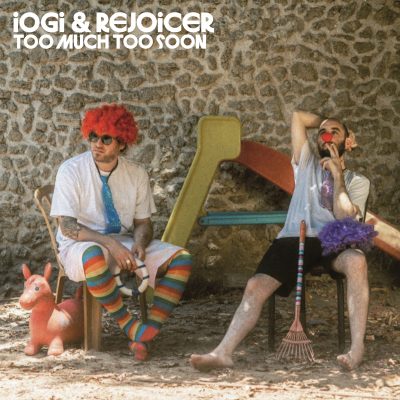 Too Much Too Soon, the new EP from iogi and Rejoicer, is a burst of creativity caught on tape — a five-day session at Stones Throw Studios in Los Angeles that blossomed into a five-song EP fusing the styles of both Tel Aviv musicians into a colorful kaleidoscope of beats and grooves. Too Much Too Soon was born in 2019 when Rejoicer and iogi were out in LA over a holiday weekend — the former a Raw Tapes founder and Stones Throw artist and producer, the latter deep in the creation of his second album (Raw Tapes’ everything’s worth it). The concept was simple — the friends wrote a song a day, and everything was allowed. “He’s a ‘yes and’ type of producer,” says iogi. Rejoicer brought his mind-expanding palette of beats, synths and rattling bass; iogi laid floating melodies and surrealist lyrics on top. “We’d drink some strong coffee and start exploring a new chord progression.” The result is a playful, funky, dance floor record — hazy and chilled out, but with a jolt that’ll get heads bouncing.

On one morning during the Los Angeles sessions that became iogi and Rejoicer’s collaborative EP Too Much Too Soon, the friends took a juice break after knocking out a dreamy, wobbly beat. It was summer in California; time for something sweet. In front of them at the juice stand: legendary actress Andi MacDowell. They returned to the studio, delighted and smiling at the fantasy of it all, and “A Thing Like You” took shape. The first single from Too Much Too Soon, “A Thing Like You” is about those moments when life is so unreal that it seems like a dream. “Not A Remedy,” the second single, is about as human as dance music gets. “All I have is a word, and a regular chord,” sings iogi. “I just wanna be heard.” It’s a universal feeling set to a slippery soundscape of undulating synths and strings and an infectious, bouncing bass line. “Not A Remedy ” is deeply conscious, capturing iogi’s desire to communicate and connect. “If I have trouble saying something, it comes out in a song. My voice is my instrument, and my outlet,” he says.