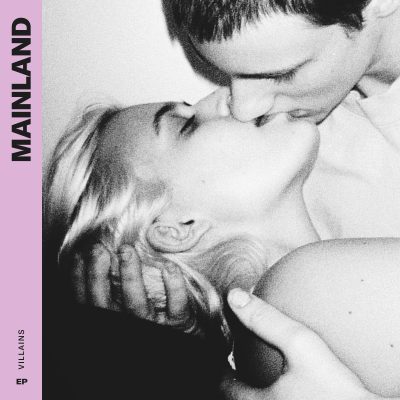 With influences from Bruce Springsteen, to Cold War Kids, to Lou Reed and William S. Burroughs, Mainland finds elegance in simplicity. Throughout their music, shuddering piano and loose guitar augment bare bones pop hooks. It’s a style that’s been carefully refined to perfection over the years. Founded in New York, the trio of Jordan Topf (vocals, guitar), Corey Mullee (guitar, keyboards), and Alex Pitta (bass) initially bonded over their shared West Coast roots and independently released the Shiner EP in 2014. That landed them a deal with 300 Entertainment, leading to their 2015 Outcast EP; tours with Melanie Martinez, Jukebox The Ghost, and Atlas Genius; and the release of fan-favorite singles “Beggars,” “Outcast,” and “Permission.” Each of those songs has been streamed more than two million times on Spotify, and now the band’s story is about to get even brighter thanks to a move to California and the release of their new EP Villains.

Villains is anchored by “I Found God,” a track produced by Sam Hollander (Fitz and the Tantrums, Panic! at the Disco, Weezer). The song “is about the spiritual connection that arises when you experience real love – an emotion so strong it unifies humans from all walks of life,” explains Topf. “It’s simple. Love is love. The power of love sees no boundaries and it transcends race, sex, and identify.”

“Indie Rock that will refuse to leave your brain” -Noisey