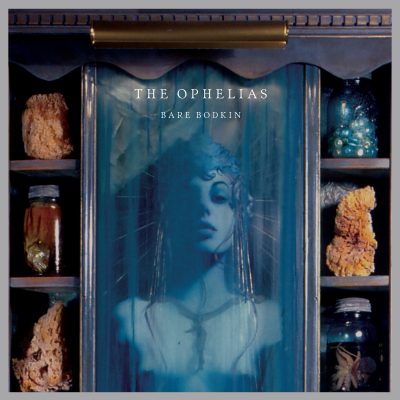 The Ophelias burst out of the San Francisco indie rock scene in 1985 and their first, self-titled LP appeared in early 1987 to widespread acclaim. “Almost every reviewer has considered them the most innovative band out of San Francisco in many years,” wrote Bob O’Brien in the LA Times. Soon they were signed to Rough Trade US and two more LPs and an EP would follow, each garnering much positive press, but the label was in shaky financial health and the folded in 1990. The Ophelias were part of the collateral damage; lead guitarist David Immerglück was recruited by Camper Van Beethoven and Counting Crows, while bandleader Leslie Medford disappeared. Still, an informed few (like Music: What Happened? author Scott Miller) consider The Ophelias one of the very best bands of the 1980s. As an outfit inspired by psilocybin should be, they were neither average nor predictable; indeed, contradiction was the group’s calling card. “The Ophelias are about the both of things: light and dark, masculine and feminine, high and low, comedy and tragedy, rationality and the unhinged,” said The Hard Report. “It’s hard for me to imagine a more audacious guy than Ophelias singer/conceptualist Leslie Medford,” wrote Ann Powers in the SF Chronicle. “Collectors and critics will probably rediscover The Ophelias in fifteen years and write blathering essays about Medford’s psychosis-tinged genius.”

Well, that time is now! Independent Projects Records is proud to be presenting Bare Bodkin: a 15-song career-spanning compendium (including 5 never-released studio tracks) of which Medford says “I approached Bare Bodkin as if it would be the last will and testament of The Ophelias, as if it alone might be our legacy – a kind of personal statement about my feelings as to the prime aesthetic thrust of The Ophelias.” Indeed, as they shout at the beginning of one of their songs, These Oafs Kick Butt!