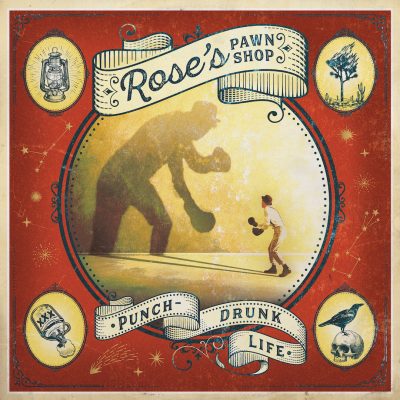 With their fusion of bluegrass instrumentation and folk-rock amplification, Rose’s Pawn Shop has spent the better part of two decades carving out an Americana sound that’s as diverse as the band’s native Los Angeles. Their past releases offer a melting pot of modern-day roots music, shot through with electric guitar, fiddle, raw percussive stomp, and stacked vocal harmonies. Anchored by the sharp songwriting of frontman Paul Givant, it’s a sound for campfires and car stereos, for front porches and dive bars, for the heart as well as the heartland. With the forthcoming LP Punch-Drunk Life, Rose’s Pawn Shop makes a long-awaited return after an eight-year absence from the recording studio. Things have evolved since the group’s previous album, Gravity Well, earned high marks from Rolling Stone (who dubbed the record “a blast of 21st century pickin’-party music”) and GQ (who praised the group’s “knee-slapping bluegrass-y twang”). Bandmates have come and gone. Families have been built. Side projects have been launched. Meanwhile, Rose’s Pawn Shop has continued to expand its artistry and audience, thanks to a dedicated touring schedule that’s taken the band from the venues of Southern California, to the fishing villages of Alaska, to the mountain towns of the American Southwest.

That momentum continues with Punch-Drunk Life. Recorded amidst the chaos of the Covid-19 pandemic, it’s a life-embracing album rooted in the lessons learned during times of struggle. Three singles – “Ghost Town,” “Gratitude,” and “Better Now,” are offered here in advance of the record’s release on February 23, 2023.

“[On Punch-Drunk Life,] the band has refined its signature mix of bluegrass instrumentation with roots-rock flourishes.” -Glide Magazine