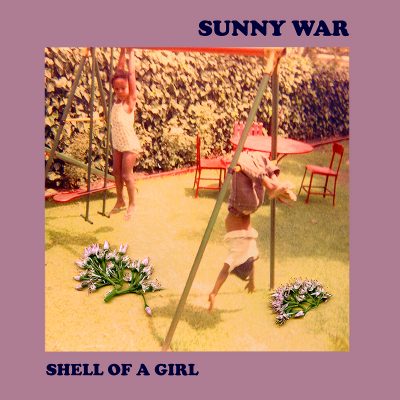 Coming on the heels of her critically-acclaimed 2018 album With the Sun, Sunny War’s  Shell Of A Girl finds the songstress and virtuosic guitarist looking back on the rocky roads of her past with a surprising amount of nostalgia. Originally from Nashville, she spent formative years in Los Angeles’ punk scene, hopping trains from a tender age and living homeless on the streets. Her music has always been raw, and she refuses to shy away from a brutal honesty about the rougher parts of her life; but now that she’s gotten a modicum of comfort and routine, she finds herself looking back to what she remembers as the happiest time in her life playing house shows with members of FIDLAR and racing through sets with her punk band. Those years provided ample creative inspiration for the LP, which was written in a burst during a transition period as War moved from the Venice Beach boardwalk where she first made her name to a studio apartment in an old halfway house in downtown Los Angeles. Recorded, like With The Sun, at Venice’s Hen House Studios with producer Harlan Steinberger, the album features a cast of musical collaborators including Micah Nelson (Particle Kid), Aroyn Davis, Milo Gonzalez, Tato Melgar, Lesterfari Simbarashe, and Edith Crash. On it, War moves freely between musical genres, anchored by her self-taught finger-style guitar work. Played on a temperamental Guild acoustic guitar she’s named “Big Baby” for its tendency to squall and feedback, Sunny’s Art Tatum-esque playing is as dazzling as ever.

Her songs cut deeply and are confessional at times, wounded at other times, and fiercely proud throughout. For example, War says album opener “Shell” is about how “in relationships, people just treat [others poorly].”  “Drugs Are Bad” attempts to reconcile Sunny’s own medicated childhood and our culture of medicating children with self-righteous parents who think the only drug addicts are those who use street drugs. “Soul Tramp” speaks to the transient’s urge to keep moving, to avoid routine and keep from being bored. “A ‘soul tramp’ is somebody who constantly feels like they need to go somewhere all the time,” she explains. “You’re just fighting that feeling. The lyrics are inspired by when I hopped trains, living off of food stamps and just drinking Night Train… Something new was happening every day, it was always interesting.” Moving further into adulthood, Sunny War feels herself pulled back to the adventure and freedom of her wild youth. But that freedom came with a price. “Almost everybody I know is dead,” War admits. “I wasn’t really planning to live past 27, so now… I feel like that old gag where two kids are standing on each other’s shoulders with a trench coat on, pretending to be an adult. I kept wondering if I’m the only one pretending or…?” Of course she’s not the only one pretending. It’s just that few other artists ask such honest questions with such an earnest curiosity.

“[Sunny War’s songs] evoke a wondrous, breathless beauty and are filled with hypnotic, acoustic calm. Her songs are exemplified by her tender voice, her unique style of guitar playing and her ability to touch the listener’s heart with her lyrics.” –WXPN’s World Cafe

“I was stunned silent [by Sunny War] …  a voice that’s strong when it should be, fragile when it MUST be, self-taught fingerstyle guitar work, and a collection of songs almost without peer…” -American Highways