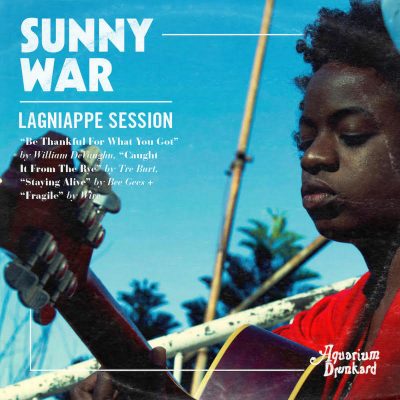 Sunny War, who released an EP of original material called Can I Sit With You? near the beginning of the COVID pandemic, now has a collection of covers available from Aquarium Drunkard. The site describes her sound as “a clawhammer infused amalgamation of blues and folk,” and over the past few years she’s performed a Tiny Desk Concert and a World Cafe Live session and had been booked at year’s prestigious Newport Folk Festival. Critically acclaimed, her last two LPs With The Sun and Shell Of A Girl have found fans at radio across North America.

The new collection includes four covers that demonstrate the breadth of War’s influences. While a version of Wire’s “Fragile” may not seem peculiar for a self-styled “folk punk” artist who got her start playing shows as Anus Kings on bills with the likes of FIDLAR, her choice of the Bee Gees’ “Staying Alive” may surprise some listeners. According to War, “I don’t know what traumatic thing happened to me last year that made me only listen to BeeGees for five months but… Something definitely happened.  I was so into them at one point I decided I wanted to know all the lyrics to all their songs so I could really sing along.  Then I discovered this ‘Staying Alive’ song is actually pretty dark and relatable.” She also presents covers of Tre Burt’s “Caught It From The Rye” and William DeVaughn’s “Be Thankful For What You Got,” which she says is her “favorite summer jam.”