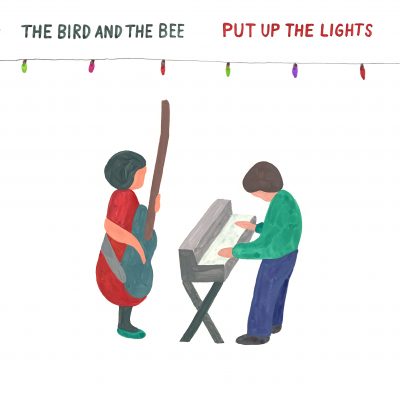 The Bird and The Bee are thrilled to announce Put Up The Lights, a collection of the duo’s favorite holiday songs alongside new and original compositions, out via No Expectation/Release Me Records. Since forming in 2005, The Bird And The Bee have brought a breezy elegance to their music, putting their own idiosyncratic twist on time-bending indie-pop starting with their beloved Again and Again and Again and Again EP followed by three original studio albums. The duo have also mastered the art of the cover song. This mastery can be heard throughout their amazing takes on timeless tracks on 2010’s Interpreting the Masters Volume 1: A Tribute to Daryl Hall and John Oates and 2019’s bombastic Interpreting the Masters Volume 2: A Tribute to Van Halen, both of which garnered critical acclaim. With Put Up The Lights, The Bird And The Bee aim to spread holiday cheer by putting their own spin on classics like “Deck The Halls,” “Sleigh Ride,” and “Little Drummer Boy” (featuring Foo Fighters frontman Dave Grohl) alongside originals like “Merry Merry” and “You and I At Christmas Time.” While the idea for Put Up The Lights dates back to 2007, it wasn’t until they released Interpreting the Masters Volume 2: A Tribute to Van Halen in 2019 that they committed to making the album. And then the pandemic hit. While the delightful duo have historically worked together in the studio, the current state of affairs would not allow for that. Instead, producer Greg Kurstin would send a track recorded in his home studio in between borrowed moments away from his kids. In turn, singer Inara George moved her recording operation into a closet and recorded all of the vocals on GarageBand in between borrowed moments away from her kids. The recording of Put Up The Lights became an unexpected source of calm and joy for the songwriters and gave light to the power of holiday songs.

“I’m so happy it’s finally here,” says Kurstin. “We included some of our favorite holiday songs and wrote a couple of originals too. One of my favorite songs we wrote is ‘You and I at Christmas Time’ which was written through email. I sent Inara the piano part and I was blown away by what she sang over it.”  George adds, “Working on a holiday record during summer is always strange, no matter what the circumstance,” commented Inara George. “But working on a holiday album during the summer, and a global pandemic, and worldwide civil rights protesting, and historical wildfires, and the lead up to the most important election of our lives is really, really strange. Although, I have to admit, it felt like such a sweet little momentary escape singing ‘Chestnuts Roasting on an open fire…’ all alone in my closet. It was a little respite from reality. Holiday songs give us such an escape from a time of year that is supposed to be so jolly and happy, but a lot of times can be so stressful and even lonely. Music in general always offers that to the listener… an escape, a moment of joy, a feeling of belonging. There’s a song out there for every occasion.”

“All the nostalgia of Christmas songs, but with more inspiration from their soft-psychedelic and indie sound.” – That Music Mag