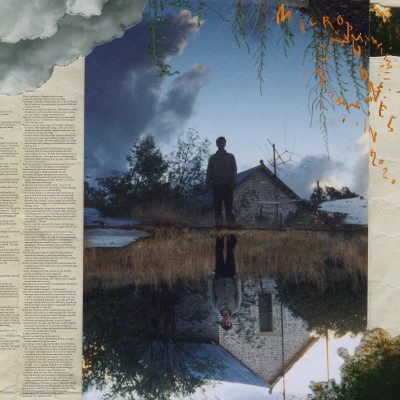 “When Phil Elverum performed as the Microphones last summer for the first time in 16 years, the choice of band name was significant, especially coming directly after a resurgence of public interest in Mount Eerie. Reviving the Microphones as a recording project is even more meaningful, given the reverence many of us feel for the albums he released under that name — especially The Glow Pt. 2, the landmark 2001 release that famously topped Pitchfork’s year-end list. Both spiritually (via Elverum’s boyish, unpolished presence) and literally (via his affiliation with K Records), the Microphones were part of a storied lineage of Pacific Northwest indie-pop. But they also tapped into the same eerie supernatural qualities that informed the region’s depiction on Twin Peaks. Those albums were not worlds unto themselves so much as chances to view this one through Elverum’s eyes, awed by your own smallness against the expanse of the ocean and the sky. This new album/song entity steps all the way back into that Microphones aesthetic, dialoguing with it, interrogating it. Elverum even quotes old lyrics and melodies at times, in between lengthy flashbacks to scenes from his life back then and proclamations like ‘When you’re younger every single thing vibrates with significance.’ Near the end, he refers to his embarrassment over “all this nostalgia” and implies that calling the project Microphones In 2020 is a nonsensical act, another doomed attempt to create order within the chaos. Maybe, but it’s also the only name that makes sense for this release, one that reckons with the passage of time in ways too complex to be written off as mere sentimentality about the good old days.

Nearly every lyric is quotable, either for its anapestic beauty or the ways it fills in the gaps of Elverum’s biography. His narration is so vivid and entrancing that you might not notice when the beat finally drops 13 minutes in, or when the music morphs into waves of noise that threaten to drown out his vocals entirely. Still, despite its droning, meditative qualities, Microphones In 2020 does not seem designed to disappear into the background. It’s best experienced like a film, listening closely and pondering deeply. ” -Stereogum