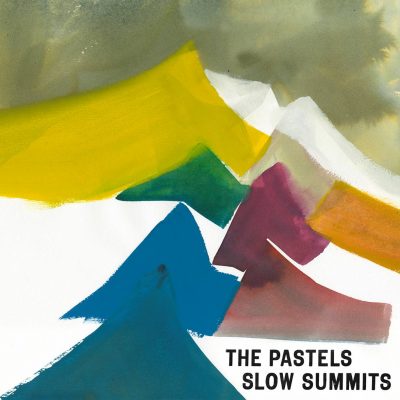 We are excited to announce a brand new album from pioneer indie-twee group, The Pastels. Formed in Glasgow, Scotland, The Pastels are part of a rich collective of influential bands that were born out of the first wave of UK and American punk and took the genre’s DIY aesthetic to add a nod to soul and their own style of jangle & breeze. This movement in the early 80s went on to influence such bands as My Bloody Valentine & Nirvana and shaped the aesthetic of such labels as K and Slumberland. After a productive hiatus, The Pastels are back to continue carrying their musical tradition into new and familiar territory with its flowing montage of autumn instrumentals, pop songs, slow motion build ups and suddenly optimistic melody lines. Their new record, Slow Summits, was recorded and mixed by John McEntire (Tortoise, Sea & Cake, Bright Eyes, Broken Social Scene) and features the core Pastels lineup. On the record, are the iconic girl-boy vocal interchanges between Stephen McRobbie and Katrina Mitchell. Mitchell’s parts can be best described as coy yet cool, most apparent on lead single “Check Your Heart”. The song is a three-chord rollercoaster that captures their essence and encompasses the jovial & dejected dichotomy subsequent bands have taken from them. Second track “Night Time Made Us” has a space to it, guided by Mitchell’s breathy melody – the song sits at the moment where dawn turns to day and the city still lies, unaware of the existing calm. “Come to the Dance” has a gentle rhythm that is peppered with handclaps and 60’s girl group coos that are delivered w/ a touch of uncertainty.

Stereogum has enthusiastically featured “Check Your Heart” and its b-side while Pitchfork shared the whole album for stream on their Pitchfork Advance platform. After all this time — and many great diversions — the follow-up to their last release, Illumination, is here: vivid and concise, in love with sound, in love with life, and ready to save us from us.

“…hear where Belle And Sebastian got some of their swag.”
– Stereogum

“True to form, the Pastels deliver an even mix of wist and whimsy set to a bright and jangly score.“
– Spin